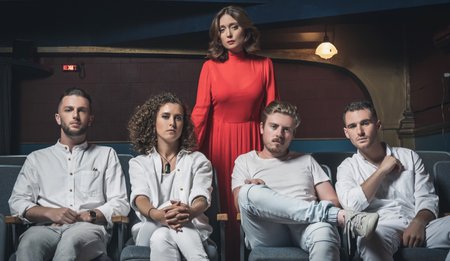 Alae's fresh pop single Help You Now is proving to be a hit in the making after a hot debut through Spotify's New Music Friday AUNZ, and their entry at #2 in the Most Added NZ radio charts last week. Alae now reveals a new layer to the Help You Now story, with the release of their masterfully crafted music video which has premiered through US tastemaker site, The Music Ninja.

Starring Antonia Prebble, one of New Zealand's finest acting talents, the visuals tell the mysterious tale of an unsuspecting ticket holder to an Alae show, who arrives to find out that all is not as it seems. "It's amazing to have Antonia in the video," Alex Farrell-Davey, songwriter and vocalist states. "She came to one of our first ever shows in Auckland, right when we first started, and has been super supportive ever since."

Shot in Avondale's legendary Hollywood Cinema, the location lends an effortlessly eerie feel for what is about to unfold. Director Mikee Carpinter reveals; "the Hollywood Avondale is over 100 years old, and we really got a spooky sense of that while setting up the shoot. It definitely added to the authenticity of the performances on the day."

For Alex, the video is a metaphor for a frightening and confronting journey through the darker corners of the mind. "It's like buying a ticket to the horror show that can be our own negative thinking. Indulging the curiosity and getting trapped there, with no one to help you out."

There will be a short film version of the music video released in the coming weeks.

Alae's new single Help You Now is available now through Spotify, Apple Music and iTunes and is released with the support of NZ On Air.