Aly Cook - ‘Not Pretty Enough’ ft Sharon O’Neill’ is a re-imagining of the 2002 smash hit by Kasey Chambers. 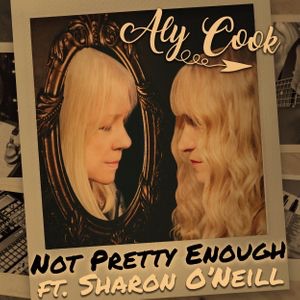 Originally the song was chosen for Aly to sing as part of Asquith Sessions No.3 featuring ‘The Tracking Crew’ (Rick Melick - Keyboards, Graham ‘Buzz’ Bidstrup on Drums, James Gillard on Bass Guitar and the late Glen Hannah on Guitars). Aly’s album ‘Caught in the Middle’ was being recorded at the same time by producers David Nicholas and Buzz Bidstrup and once the beautiful voice of Sharon O’Neill, who is featured in answer lines and harmonies, and additional acoustic guitar from the talented Dean Ray was added, it was decided to add it to the ‘Caught in the Middle’ Album. The 12 track album was released in September to acclaimed reviews and has enjoyed appearances on both ARIA Country Album Charts in Australia and on the New Zealand Official Album charts. The new radio mix of the track will be added to the Asquith Session’s Australian Classic Playlist on Spotify & Apple Music. The ‘Caught in the Middle’ album has also been recently added to the Air New Zealand international inflight entertainment programming.

Aly Cook is currently in Australia for a month having attended The Tamworth Country Music Festival and then travelling to QLD to open for Australian Band GANGgajang before embarking on a radio tour down the coast to Sydney. Aly will also be at the Tamworth Songwriters Association Awards where she has two songs as finalists.