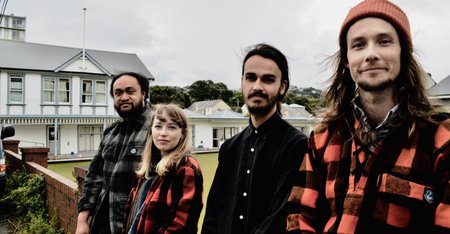 Joined by Ben Lemi (French for Rabbits, Trinity Roots, Dawn Diver), Deanne Krieg (Ida Lune, Congress of Animals) and Samuel Austin on live duties, the SIL Tour will take in some of New Zealand's favourite boutique venues, transforming them into the perfect backdrop to experience this psychedelic folk quartet.

Kicking off tonight at Leigh Sawmill with support from Auckland's Fables, the tour heads to Auckland's Wine Cellar on Saturday night, where A.U.R.A will be additionally supported by French for Rabbits, fresh from their US tour and showcases at SXSW.

The tour then sails across the Strait for shows at The Plant in Blenheim on 2 May, Lyttelton Records in Christchurch on 3 May, and 4 May at the Captain Cook in Dunedin. The final leg will see A.U.R.A perform at Napier's Paisley Stage on 10 May, before wrapping up on home turf on 11 May at Third Eye in Wellington.

A.U.R.A has sparked attention both at home and abroad, with lead single G.I Wonder selected as the soundtrack for US fashion label Kate Spade's Spring 2019 campaign, which has generated over 4.6 million views on YouTube alone. Back in Aotearoa, consecutive singles Who Decides and Immensely I have become student radio favourites, placing A.U.R.A consistently in the listener-voted charts. Reviewers are chiming in and calling Secret Intelligent Light: "A sophisticated, gorgeously produced album" - Elsewhere.co.nz, "Idyllic and stunning" - Earmilk, "Highly-promising artist to watch"- Atwood Magazine with Grant Smithies of RNZ declaring that he "gotta find out more about this guy" during his Nine to Noon RNZ slot.

Don't miss your chance to see this very special tour. Full tour dates and tickets can be found at undertheradar.co.nz.

Secret Intelligent Light, which includes the singles G.I Wonder, Who Decides and Immensely I, is out now through Spotify, Apple Music and iTunes. Vinyl available from all good records stores, and through Cosmic Dreamer Music.