Genre-bending Persian/New Zealand rapper CHAII unleashes the culmination of a diverse creative vision on her debut EP Lightswitch—a bold six-track visual collection showcasing sounds and footage from Oman to Joshua Tree. With the release of her EP, CHAII is ready to take her place on the world stage and is rapidly making an impression as an exciting emerging voice to keep an eye on. 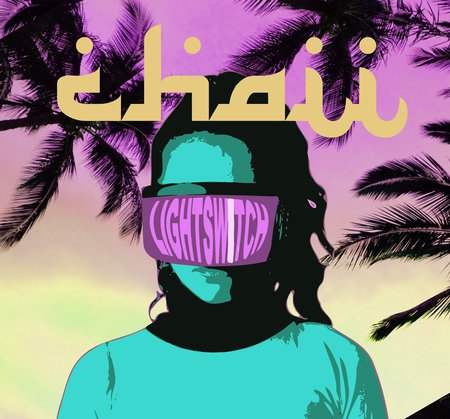 Comprised of three new singles and videos dropping today alongside three previous releases, the visual EP charts the swift evolution of CHAII’s hard-working attitude and punching output. Title track “Lightswitch” (produced by Frank Keys and mixed by Grammy-winner Jaycen Joshua [Rosalia, A$AP Rocky, Nicki Minaj]) is a neon-soaked, dance-floor filler that calls out fake culture. CHAII explains that the song “…is about the raw realness in everything, being true to yourself and how obvious it is when people are fake.” Premiered via Clash, the video explores the contrast and division between neighbourhoods in LA, as the NZ rapper fleets between Santa Monica beach on a technicolour bicycle to desert landscapes.A hypnotic thump announces the arrival of second track “Nobody Know”, produced by CHAII and Soraya LaPread, mixed by (Sylvia Massy, Alanis Morrisette, Tool) and premiered via GUAP Magazine. Dropping a distinctive freestyle that was originally meant as a guide vocal, the tracks soon leads into “Middle Ground”, produced by Frank Keys, mixed by award-winning engineer Chris van de Geer and premiered with Fault Magazine. The three-part art-piece provides a commentary on an artist’s struggle and eventual triumph over the self-doubt that so often plagues creators, an inspiration which CHAII discusses, “I was once told that the high and low feelings in life are a reflection of your thoughts and subconscious — they are not real, nor should we be aiming for them. The middle, however, is a state that is true and constant."Closing out the EP is CHAII’s debut trilogy of singles, including the hard-hitting bass and crisp flow of “South”, followed by Rolling Stone Australia’s ‘Song of the Week’ “Digebasse” (featuring Nigerian-Australian rapper B Wise), and her most recent heart-thumping single, “Trouble”.Inspiration for the Lightswitch visual EP came from CHAII’s journey of learning more about Iran’s 1979 Islamic Revolution. The resulting upheaval forced countless creative talents, including musicians, actors and artists, to leave Iran and relocate to California after their work was banned in their homeland. Forty years later, California remains home to the largest Persian music community outside of Iran. Of this inspiration, CHAII said, “I am part of the new generation of Iranian immigrants who are creating music outside of Iran. Coming from New Zealand, where there’s a very small Persian community that you barely see or hear from, it was a revelation to experience the perfect blend of Western and Persian influences when I first visited LA to see family.” Self-directing and producing all videos on the EP, CHAII filmed ‘guerrilla style’ with her small crew of friends – Brooke Tyson (stylist), Abe Mora (DOP) and Frank Keys (behind the scenes). Speaking on shooting the stunning visuals to the Lightswitch EP across both Oman and California, CHAII comments, “We captured so much of the spirit of my early childhood memories of the Middle East in the videos for ‘South’, ‘Digebasse’ and ‘Trouble’, and to film the videos for ‘Lightswitch’, ‘Nobody Know’ and ‘Middle Ground’ in California, the home of the largest Persian music community outside of Iran, felt like the perfect place with the right mood for this project.”Despite her sudden arrival, CHAII’s music has already attracted the attention of Italian fashion brand FENDI, mixed martial arts organisation UFC and Charlize Theron’s new film The Old Guard, which drops globally on Netflix today featuring “Nobody Know” to underpin a high-energy fight scene. In June, CHAII was announced as the first-ever New Zealand Spotify RADAR artist, the streaming giant’s global emerging-artist platform which helped launch international stars including Lauv, King Princess, Jorja Smith, G-Eazy and Trippie Redd.A multi-skilled rapper, producer, engineer, director and more, CHAII’s rise to the global spotlight is only just beginning, propelled by her knack for creating hard-hitting beats alongside Western hip-hop and Persian influences unlike any other today. LIGHTSWITCH IS OUT FRIDAY, JULY 10VIA BLACK LOTUS / BMGBUY/STREAM HEREAUDIO ASSETS HERE TRACK INFORMATION HERE CHAIIINSTAGRAM | FACEBOOK | YOUTUBE