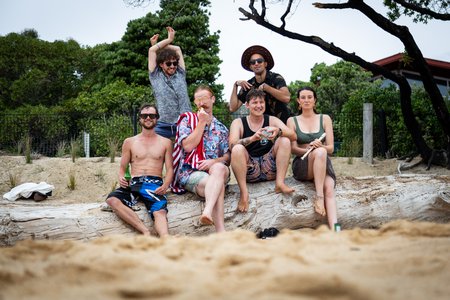 The new track is a flavourful combination of catchy guitar riffs, a flirtatious bass line, fresh harmonies, all wrapped up with a rich finish of fruity synth. Misty was written by Horizone frontman Josh Burke, with the whole band collaborating to weave together the sounds of this summery reggae tune.

The music video for Misty has just dropped on facebook and youtube, consisting of footage from this summer’s touring shenanigans and is rumoured to be one of their most polished clips yet.

Horizone has been on the road over the 2019/20 summer season, playing a series of shows around the South Island including their third year returning to the Mussel Inn. Their sound has been taken to the next level over the summer with cameos from Andy on the sax and Keagan tapping in on the percussion. But the tour highlight came playing to a sold-out crowd at the Boat House in Nelson, alongside fellow Christchurch band and indie pop-rock outfit, Mako Road.

Next on the horizon will be three appearances at the Christchurch Night Noodle Markets on 6th, 14th and 15th of February 2020. Come on down, chill on the grass in the summer dusk, and soak up the sounds of Horizone and their latest single Misty.