Leonard Charles and Guilty Simpson Sample Marlon Williams Song for ‘Nobody’, the First Single From L.S.D. By the Leonard Simpson Duo 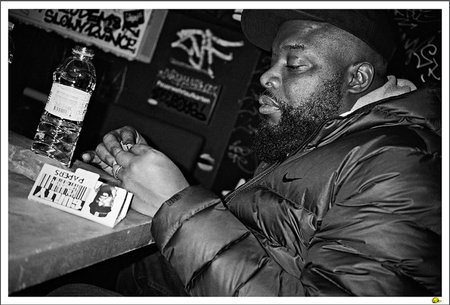 Legendary Detroit MC Guilty Simpson and New Zealand producer Leonard Charles have teamed up as The Leonard Simpson Duo and are set to release a one of a kind 60’s & 70’s inspired, psychedelic & acid influenced album L.S.D. on 31 January on Berlin’s Jakarta Records.

The uniqueness of this very special symbiosis of Leonard Charles and Guilty Simpson can be heard within the album’s first single ‘Nobody’, which opens with a sample from ‘Nobody Gets What They Want Anymore’ by Marlon Williams ft. Aldous Harding. The single premiered today on heavyweight US website HipHopDX.
The Leonard Simpson Duo’s ‘Nobody’ came to be after Leonard Charles’ wife, Anji Sami, sent him what would become the 2018 Silver Scroll winning track with the suggestion that the chorus could come in quicker because it felt so good.“I jumped in my studio and threw a draft beat together and looped up the hook,” he says. “I sent it to Guilty that night and it was a no-brainer, he jumped on it.”“The song is about the evolution a man should go through during maturity", Guilty adds. "Negative vibes will only get a person so far before they self destruct.”The result is a stunning fresh take on what might be New Zealand’s ultimate break-up song, and an introduction to what  the 40 minute, 14 track debut from two brilliant and ingenious musicians will offer adventurous music lovers in late January when L.S.D. drops.The psychedelic sound of the album is heavily drawn from rare acid influenced records from New Zealand’s 60’s and 70’s, carefully selected, picked and sampled by musical multi-talent Charles himself and accompanied by very well placed instrumentals and interludes taking direction from late 60’s jazz/rock fusion, fuzzed out African records and compulsory David Axelrod leanings. All of that combined with the lyrics and the beloved attitude of Motor City’s finest makes this album a beautiful, inspirational and surpassing trip. The duo met for the first time when Guilty came through Auckland on tour in 2016. Leonard Charles reached out to Guilty and the two connected immediately, getting in the studio to create the track ‘Breaking Over You’, that was released in late 2017. The pair then started working together on what was initially planned as an EP, that soon turned out to become a full-length album with late 70s inspired psychedelic and acid influenced beats by Leonard Charles, overlaid with Simpson’s distinctive and uncompromising lyrics.  Listen to ‘Nobody’ now on streaming services. The Leonard Simpson Duo’s debut record L.S.D is out digitally and on LP on 31 January 2020 via Jakarta Records and is available for pre-order now.

Guilty SimpsonActive since the mid-90’s Guilty Simpson has become an institution and earned his spot in Detroit’s hip-hop legacy alongside friends, fellows and colleagues such as J Dilla, Slum Village, Eminem, D12, Danny Brown, Big Sean, Phat Kat or Black Milk and receives nothing but love and respect from the hardest street emcees as well as from acclaimed producers wherever he goes. Over the last decade Guilty continued the name he made for himself since his 2008 debut “Ode To The Ghetto” (produced by J Dilla, Madlib; Black Milk and others) and has delivered plenty of features, mixtapes and studio albums ever since.

Leonard CharlesLeonard Charles is the music producer moniker of Jeremy Toy. He attended the Red Bull Music Academy in South Africa in 2003 where he performed with Hugh Masekela and attended lectures with synth pioneer Bob Moog. He produced New Zealand Music Award winning albums by Opensouls and Hollie Smith and has played on recordings for Aaradhna, Teeks, David Dallas, Homebrew, Avantdale Bowling Club, Ladi6 and more. As a producer he has worked with Grandmaster Caz, Kimbra, Mara T.K., Georgia Anne Muldrow, Declaime, and mixed, arrangement and drum production on the Silver Scroll winning ‘Everything to Me’ by Lips. He also works as a composer for film, notably the hit comedy The Breaker Upperers.