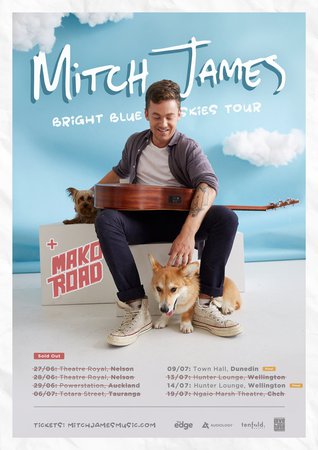 Chart-topping pop sensation Mitch James has added an extra date to his upcoming SOLD OUT Bright Blue Skies NZ Tour, which kicks off in Nelson with back-to-back shows at the Theatre Royal on June 27 and June 28 and wraps up at the Ngaio Marsh Theatre in Christchurch on July 18.

Tickets to all of the Kiwi singer-songwriter's shows on the Bright Blue Skies Tour were snapped up within a matter of weeks, with only a handful left for the Dunedin show at the Town Hall on July 9. To cater to the overwhelming demand, James will now play a second show for all ages in Wellington at the Hunter Lounge on July 14.

Get remaining tickets here.
See below for full list of shows and venues.

Kiwi four-piece indie pop-rockers Mako Road will open for James, who is playing a string of shows - including a sold out gig in London - in late May. He will also make an appearance at this year's Ohakune Mardi Gras on June 22.