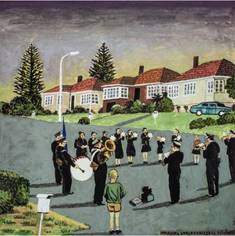 Recorded Music New Zealand CEO Damian Vaughan says the calibre of talent in Aotearoa’s music scene is enormous - and the fact that the Artisan Awards are growing every year is testament to that.

“For the fourth year in a row, we’re recognising the producers, engineers and artists that help and support the phenomenal musicians making music throughout New Zealand.

“This year, alongside the MMF (NZ) we’re also shining a light on those responsible for managing fostering newcomers and industry veterans alike. We’re excited to celebrate the year that was and look forward to the next 12 months for Aotearoa’s music industry.”

The Massey University Best Producer finalists for 2019 are Josh Fountain for his work with BENEE, Foley, LEISURE, and MAALA, Simon Gooding, Ji Fraser, and Eli Paewai for their production of Mitch James’ self-titled debut album, and Tom Healy for his great work on Tiny Ruins’ Olympic Girls.

Taking the stage twice, LEISURE’s Josh Fountain is also a finalist for Best Engineer for his work, including his band’s track ‘Easy Way Out’. Joining him is 2x Tui winner Simon Gooding for Mitch James Mitch James, and Ben Lawson and Vivek Gabriel for their work with Avantdale Bowling Club’s self-titled album.

Finalists for NZ On Air Best Music Video for 2019 is Jason Brock for his creative work on the single ‘Feeling Free’ by LEISURE, Martin Sagadin who worked with co-director Aldous Harding on crafting her video for ‘The Barrel’, and Vision Thing for their incredible work on ‘Rock Bottom’ by Randa.

This year’s finalists for Best Album Artwork include last year’s winner Jaime Robertson for his creative work on Rhian Sheehan’s album A Quiet Divide, Mike Braid for the quirky album art on Villainy’s third album Raised in the Dark, along with Tim Harper and Dick Frizzell for their work on Offering – an album of gospel hymns 17 years in the making, released in memory of the tragic Christchurch massacre earlier this year.

After being introduced last year, the Music Teacher of the Year will once again be celebrated at the Artisan Awards. This year, the finalists were selected from over 200 nominations received for 76 individual music teachers/mentors across Aotearoa.

For the second year in a row, Jane Egan from Gisborne Girls High School is a finalist, alongside Duncan Ferguson from St Andrews College in Christchurch and Sue Banham from Rosehill College in Papakura, Auckland.

In addition to the five Tui awarded on the night, this year the MMF (NZ) will present the Recorded Music NZ Music Manager of the Year at the Artisan Awards.

With 15 years under her belt as a music manager in NZ, Lorraine Barry is a finalist for her work with some of Aotearoa’s biggest acts including Vodafone New Zealand Music Award’s finalist Avantdale Bowling Club and founding member of 2019’s Hall of Fame inductees Th’ Dudes and singer songwriter Dave Dobbyn. Christchurch band nomad round out her stable of artists.

CRS Music Management represent several of our up-and-coming artists, including MAALA, Jon Lemmon, and Openside, and manager Paul McKessar is the man behind them. He also works closely with 2019 VNZMA finalist BENEE and helped launch her career, which includes a platinum single in New Zealand and Australia and sold out shows in Melbourne and Sydney.

Niel de Jong and Oliver Kraemer are the final music managers in the running for the Music Manager of the Year Award for their work with thrash metal band Alien Weaponry, who won Best Rock Artist I Te Kaipuoro Rakapioi Toa at the Vodafone New Zealand Music Awards last year.

Niel has been involved with the music industry since the 1980’s as a musician and engineer before shifting to music education and management, while Oliver holds a BA in Music Business and a MA in Art and Media Management. He began his journey in Berlin as assistant manager to legendary German punk band Beatsteaks

MMF chair Teresa Patterson says: ’The MMF are incredibly honoured to be able to present the Manager of the Year award as part of the Artisans Awards. It elevates the recognition of the important and tireless work Music Managers do behind the scenes for their artists. The calibre and quality of the nominees were of a very high standard, which has been reflected in the three finalists.

Andre Ktori, Head of School, School of Music and Creative Media Production at Massey University says: “We are really pleased to be hosting the 2019 Artisan Awards again at the College of Creative Arts.

“We are super excited to see an award for best music manager this year, a great addition to the awards. Hosting the awards and the Tui Music Series is great for Wellington and a great fit for our world-class music school.”

The 2019 Artisan Awards begin at 7pm on Monday 4 November and will be streamed on both the Massey University College of Creative Arts and the official NZ Music Awards Facebook pages, so people can tune in from anywhere in Aotearoa to celebrate alongside the Kiwi music industry.

The Vodafone New Zealand Music Awards | Ngā Tohu Puoro o Aotearoa will be broadcast live on THREE on 14 November from 8.30pm. General public tickets can be purchased through Ticketmaster