New Zealand born Singer/Songwriter Vanessa Delaine was born with a voice that leaves audiences breathless. She is at home telling stories and singing clever lyrics and loves to connect with her audience. Her songs encompass an original blend of Country, Blues and Roots and she gracefully moves through styles/genres. Whether solo or duo is captivating and leaves audiences wanting more. 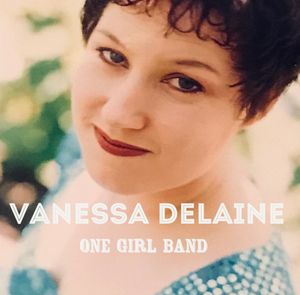 In December 2019 Vanessa decided to release her first album in 2020. Celebrating 25 years since she wrote and recorded the album ‘One Girl Band 25 Years’ and its companion album ‘The 1995 Sessions’.

The Title Track, ‘One Girl Band’, is an upbeat toe-tapping traditional country song that you can’t help singing along to, the second single to be released off the latest album ‘One Girl Band 25 Years’. Celebrating 25 years since the songs were written and recorded and she is  delighted by the beautiful compliments the songs are getting.

She reflects ..“I wrote this song as ‘theme song’ and even today it is still one of my favourites off the album”.

Vanessa was awarded Top 5 female vocal, her first time at Tamworth’s National Talent Quest in 1996 and the only original song performed that year. Vanessa’s Dad loved the song so much he phoned everyone he knew to play it to them over the phone but unfortunately, he died before the album was finished.

Delaine won ‘Best Female Performer’ at The American Tracks Awards, was a finalist for ‘Female Vocalist of the Year’ at Gold Media Medallion Awards and has had charting success in USA, Europe and for Australia. Her music videos have also been awarded close to 20 awards at international film festivals.

Her newly released fourth album ‘One Girl Band 25 Years’ had already placed in five prestigious song-writing awards including; NZ Gold Guitars Song-writing Awards and Tamworth Songwriters Association Awards and this year debuted in the Top40 Country Charts in USA, Europe and Australia and Tasmania. Her hit song ‘How Can He Love You’ is currently sitting at #6 in Australia and reached #9 in the USA (The Music Review Chart)

She has performed her original music at Music Festivals around Australia, toured extensively and been performing on both sides of the Tasman since childhood. These days Vanessa proudly calls Australia home.

One Girl Band on Spotify:  https://open.spotify.com/track/7zFVAXaWm2Hz2ERc4JXyqf?si=kFGWlBxkQsO-fOKO55ESjA