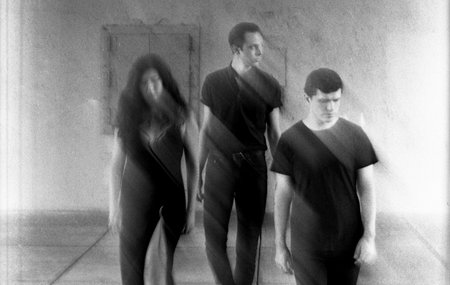 WAX CHATTELS SHARE SECOND SINGLE 'EFFICIENCY':
A GRITTY EXPRESSION ON THE ART OF BITING YOUR TONGUE

PLUS, FIRST LIVE SHOW IN NEW ZEALAND SINCE
PANDEMIC SHUT DOWN

The explosive arc of 'Efficiency' acts as a sonic metaphor that depicts knowing when to bide your time and when to push, with the trio treading the line between the explicit and intuitive. This track follows their first single 'No Ties', a melodic single about the experience of being a first generation immigrant that BrooklynVegancalled “ferocious.”   Peter Ruddell on 'Efficiency'  - "’Efficiency’ is about the frustration felt when you force yourself to bite your tongue, instead of escalating uncomfortable conversations into confrontations. It's about biding your time, finding the right time and place to express your concerns — and with this song, it's about coming to the bleak realisation that, more often than not, nothing will ever change.”Check out the brutal(ist) video for 'Efficiency' below. Directed, filmed and edited by Ezra Simons. Animation and titles by Neirin Best.

While it seems like a pipe-dream in most places, Wax Chattels had their first live show since the pandemic began in New Zealand on July 24th. Local media Radio13 described the sold-out show as possessing “an unyielding abrasiveness...relevant to today's psychic condition”, whilst Post Magdescribed the band's performance as "a tight grip around your arm ... steady eye contact and a demand that you don’t turn away".

After a knock-out entrée with 2018’s self-titled LP, the anticipation that surrounds Clot is immense. Much like Wax Chattels, the writing process for Clot took the best part of a year. While some songs were written on the road, the bulk of the album was workshopped throughout 2019 across bedrooms and storage containers. Wax Chattels maintained the use of only the barest of ingredients — bass guitar, keyboard, and a two-piece drum kit — but the group spent more time experimenting with and finding new sounds. They wanted to maintain the same live element as in their debut, but, this time, heavier — for which they enlisted the help of mixing engineer, and fellow noise-maker, Ben Greenberg (Uniform, Destruction Unit, The Men). A marked step-up, this new record keeps the visceral energy of the debut, only this time they dig deeper into cathartic noise. Clot’s inspiration — or, rather, frustration — came from the doomy, gloomy corners of Auckland’s underbelly, and the theme of confrontation is central.

It is universally agreed that Wax Chattels are a must-see live act; their hypnotically sinister debut captured this perfectly. Released in 2018 and supported by relentless touring, the eponymous album reached #7 on the Official New Zealand Album Charts, and release week saw the title feature as #1 in Rough Trade’s Top 20 New Releases. Tastemakers like NPR and A.V. Club came on as early champions. The album’s success at home and abroad led to the well-deserved nomination of Best Alternative Artistat the 2018 New Zealand Music Awards, as well as the band’s inclusion in the coveted shortlist of finalists for the Taite Music Prize and Auckland Live Best Independent Debut Award.